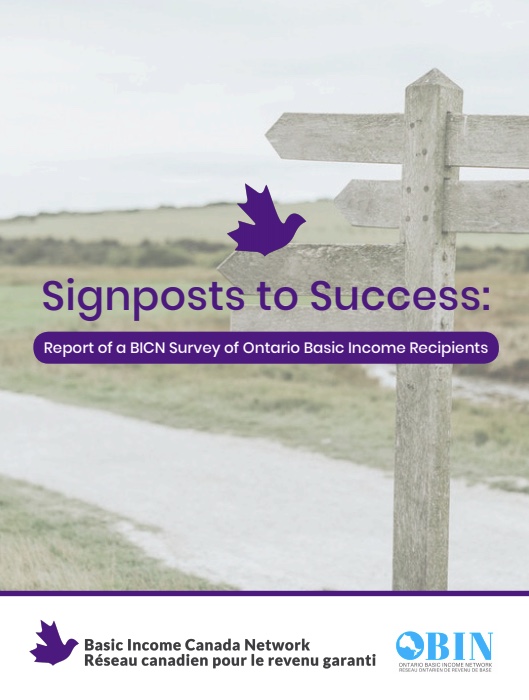 The Basic Income Canada Network (BICN) today released a survey report, Signposts to Success, documenting the experiences of recipients in the Ontario Basic Income Pilot (OBIP). It provides compelling indicators of lives remarkably changed for the better. Responses from more than 400 recipients show that the pilot was working - enabling women and men to get and keep jobs, start businesses, pursue education and training, overcome barriers and improve health and well-being for themselves and their families.

“The Signposts to Success report is good news that has powerful significance for all Canadians”, says BICN Chair Sheila Regehr. “It clearly shows that when people have some basic security and genuine options, they make the best of them.” Canada has delivered forms of basic income for seniors and children for years, benefiting our society and economy. OBIP results show the potential it offers for all of us. “BICN urges federal, provincial and territorial governments to invest our money where it will get the most return -- and a basic income is that kind of investment.”

When cancellation was announced, the picture changed:

"The report highlights the potential of basic income to improve health and well-being. Poverty causing ill health is a critical issue I see every day in my work, one that our health care system alone cannot fix. The cancellation of the pilot was a devastating loss – both for participants, and of invaluable research that would have been gained from allowing its completion,” says Dr. Alissa Tedesco, a physician in Toronto and Co-Chair of Health Providers Against Poverty Ontario.

The 3- year OBIP began in 2017, with international eyes on it as among the most comprehensive pilots in the world, but the current government cancelled it in 2018, before gathering its own follow-up information from participants; it is set to end in March this year.

“This is an important and timely report from BICN”, notes Jamie Cooke, Head of RSA Scotland (Royal Society for the encouragement of Arts, Manufactures and Commerce). “For those of us working on this issue in Scotland, and across the world, the self-organizing of the participants in Ontario has been inspiring and is shaping our own thinking about experiment design. We will continue to work with Canadians to envisage a better, more secure future.”