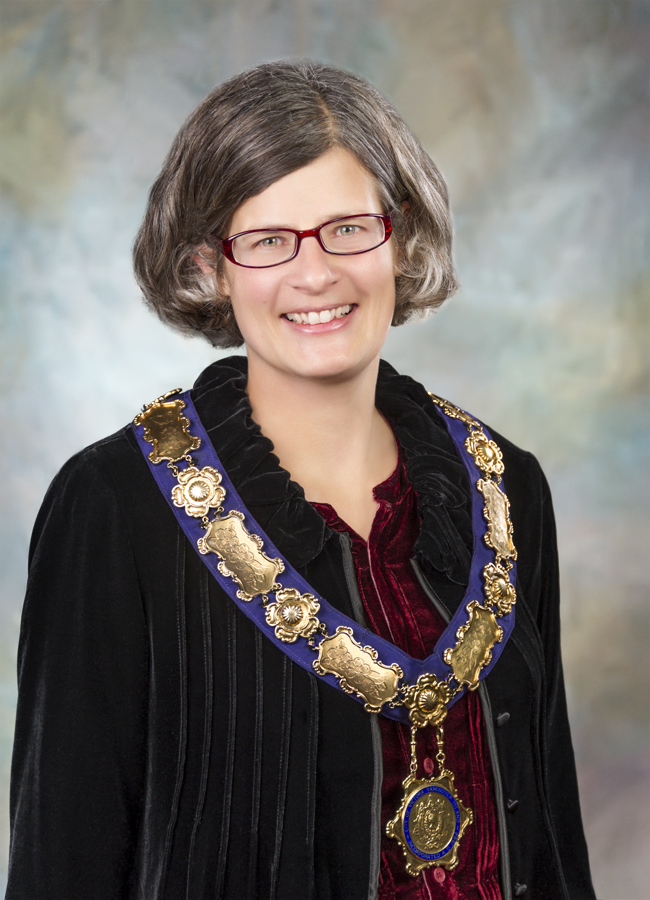 “There is a strong link between having a basic income and creating a strong local economy. There is more money to circulate and it supports the ‘buy local’ movement,” she says.

“So that means it’s good for the people who need more to live on, but also for the goods and services being sold by our business community,” Helps says.

Many Canadian mayors were invited to complete a national survey by Leaders and Legacies, in order to gauge municipal level support for a basic income guarantee policy. Her city – Victoria – represents the sixth provincial or territorial capital leader to support the policy.

Helps says that out of the 13 municipalities that make up the Greater Victoria Area, with a population of 345,000, her city has the lowest average and median income in the region, at $38,000 a year.

“That’s not affordable with the cost of housing and food,” she says.

That’s why Helps likes to talk about how to create prosperity for all, rather than ‘combat poverty.’ This reframing is valuable, she says, because it serves to keep thinking about growth and improvement, rather than in a deficit model.

Helps is hopeful that the federal party leaders will begin to address inequality issues more rigorously. She points out that the NDP have touched on important issues with their promise of a $15 universal child care program and the Liberals’ promise of an enhanced Canada Child Tax Benefit is welcome news. The Green Party, she notes, has talked the most consistently about inequality – including a guaranteed liveable income.

“I don’t think we can continue with the status quo in Canada. I want to see the rubber hit the road on these issues,” she says.

Helps tells Leaders and Legacies that she already has her plane ticket booked for Ottawa in early December to petition the new government for action on basic income policy and other inequality issues, such as housing and homelessness. The federal election will be held October 19th.

Once she knows who the ministers are and what portfolios they hold, Helps says she will be on top of these issues for Victoria.

She knows that mental health and addictions support, in addition to housing, would have to go hand in hand with a basic income guarantee.

Cities and Citizens Making a Difference

The mayor says she will continue to advocate and speak out about basic income and other issues that prevent economic prosperity for all people.

“I work to pass motions to the Federation of Canadian Municipalities. I focus on local economic development strategies. I also believe in creating social enterprises so that we can generate revenue and create a social good at the same time.”

Helps says governments at all levels “need to pay attention to low income earners” because getting such earners more fully engaged in the economy benefits everyone.

Citizens need to make noise, write letters, and pressure politicians, she says, to bring about the changes they want to see. At the same time, she believes it can only be effective “if elected officials are listening.”

“The election is a great time to ask if there’s any listening going on. We can point to the income inequality we are seeing in Canada. We can ask everyone what they’re going to do about it. And we need to be very specific in our advocacy.”

“We’re working hard in the cities here and it would be nice to have a federal government that could help out,” Helps says.