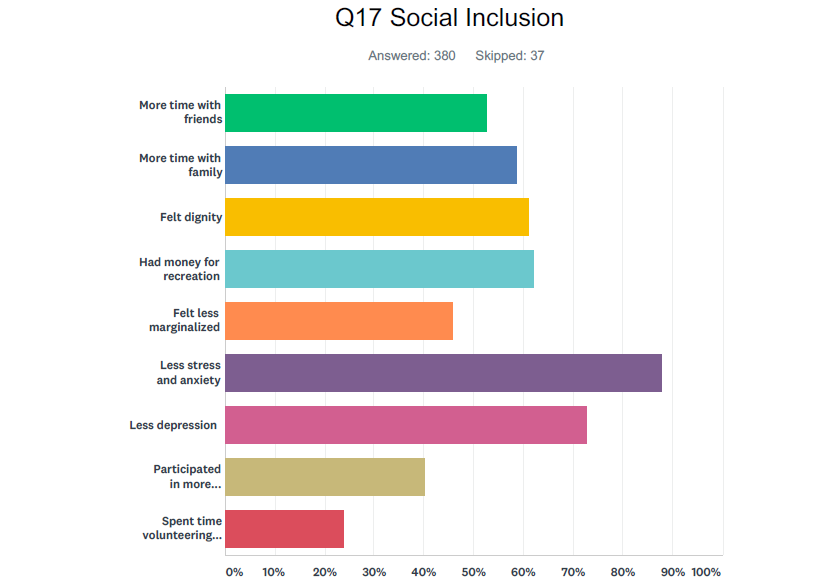 Nearly 88 per cent of respondents to a survey about the Ontario Basis Income Pilot say the program helped lessen the stress and anxiety that came with not having enough income to meet their needs.

The survey also shows that nearly 73 per cent of respondents felt less depressed than they previously did, prior to being eligible for basic income.

In comments made in the survey, Jennifer remembers she finally felt like she was a part of society, not isolated from it.

“I finally felt relieved not worrying on an everyday basis about rent, food, being able to go out for a tea when asked, to pay for uncovered meds needed, and I could sleep without anxiety,” she says.

“It was a feeling of confidence and self worth.”

Jennifer had worked her whole life since the age of 14, until she was diagnosed with a chronic, serious condition. Even afterwards, she still worked part time until working made her illness worse.

“So I was back to living with not enough money for rent,” and other things, she says. “Basic income was the right thing to do for so many of us. I’m not lazy and never have been. We shouldn’t be punished for something we have no control of.”

For Amber, the cancellation of basic income by the PC government meant a return to having regular stress-induced headaches.

“I had to fight to get more shifts at work that previously I had forgone,” she says, given she was trying to balance her work with school.

Her grades weren't as good as she needed them to be, so she was trying to work a little bit less and was able to do that at first, when she was receiving the hand up of basic income. With the amount of shifts she had, there “wasn’t even time to sleep.”