Near Lock 33 in Lindsay, there is a constant buzz of activity in the summer.

Children fish from the banks of the Scugog River as it snakes its way through town. Visitors stroll along the wooden boardwalk, snapping up pictures of the town’s old mill.

The locks, old mill, and river parks are the natural heart of Lindsay, all just mere steps away from its healthy downtown core. Here, one of the widest main streets in Ontario bustles with people and patios. It’s a downtown where people still actually shop, free from the retail clout of Wal-Mart, though developers continue to try and change that.

Lindsay, as local basic income advocate Mike Perry calls it, is a “Norman Rockwell town” of the north. 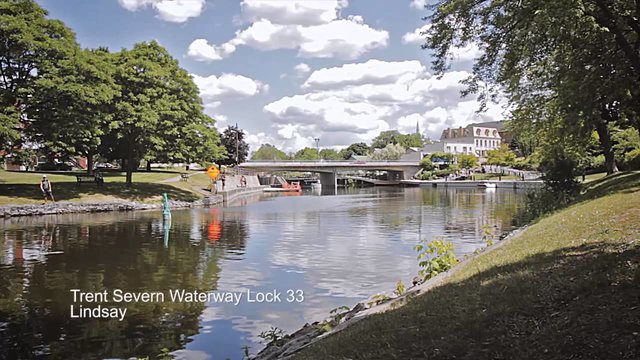 While the 20th century American painter might very well have chosen Lindsay as a subject, had he lived in Canada, the town has been chosen by the Province of Ontario for an important experiment.

The Province’s palette, though, will be numbers, data, and evidence, as it seeks to test the merits of a basic income guarantee in the town over a three-year period starting this fall.

A basic income ensures everyone an income sufficient to meet basic needs and live with dignity, regardless of work status.

“Lindsay is going to be poked and prodded and analyzed,” says Perry, who led lobbying efforts to get the pilot here, as chair of the Kawartha Lakes Food Coalition.

“So we have a responsibility to make sure this goes well. We know a lot of people will be looking at Lindsay.”

In fact, out of the 4,000 participants, who will be invited to participate, 1,000 will be from the Hamilton/Brantford area and another 1,000 will be from Thunder Bay. However, 2,000 participants will be invited from Lindsay, making it a vital part of the pilot to test behaviours, work patterns, health and mental health outcomes, housing stability, educational attainment, and how the community as a whole may benefit.

The plan is to invite a mix of people into the program, such as those who are working but not working enough to stay out of poverty, those who are currently on social assistance, and homeless people.

Making the Case for Lindsay

Perry serves as executive director of the City of Kawartha Lakes Family Health Team, a multi-disciplinary group of health professionals in Lindsay. And, as chair of the Kawartha Lakes Food Coalition, he says his advocacy team “kept it practical” when trying to convince the Province to choose Lindsay as one of its basic income pilot sites.

His team put together a pitch document. They met with government officials, with two separate trips to Queen’s Park. They met with individual MPPs. They included people who had lived poverty experience within the documents they provided, based on past consultations they held in the town.

“There is a definite need” in Lindsay, Perry tells the Precarious Work Chronicle, with its income levels sitting at below the provincial average.

He says they also made the case that there are a lot of social service agencies here, too, “so we have a lot of data from which we can better measure the results of the pilot,” he says.

Perry says they made it very clear in their advocacy that Lindsay has:

“We have a real concentration of infrastructure and services here. We’re urban, but in a rural area. We’re very much a classic-sized, mixed economy, with rural services and industry. So, yes, we have farms, but we also have Crayola,” Perry says, referring to the crayon manufacturing giant’s Canadian head office in Lindsay.

Perry believes that the basic income pilot is “going to be a game changer here.”

“There’s going to be 2,000 people from our area and that will really have an impact we’ll notice,” he says.

“It’s really going to help people – it’s an incentive to get out of the welfare trap. I see it as a trampoline.”

He envisions a wide variety of people benefiting, from people on social assistance, to students from Fleming’s Frost campus, struggling farmers, and new small business owners trying to find their footing.

Perry, wearing his hat as president of the local Chamber of Commerce, say a basic income “means more spending power in the hands of more people, which is good news for local businesses and community economy development.”

The Kawartha Food Coalition chair has no patience for people who can’t even get behind a pilot project that tests the efficacy of a basic income guarantee.

Perry says to imagine if Tommy Douglas, Canada’s founder of Medicare, had given up because it sounded too hard or too complex to set up.

“We may never have had universal health care.”

Perry also points out that “no one is getting rich on basic income.”

“It’s meant to ensure that no one lives below the poverty line and that’s something we can do for each other in a country as rich as Canada,” Perry says.

He would tell someone who is receiving the basic income that it’s also “an incentive program.”

“You can still go out and earn income – and that’s an incentive. Go get active in the labour force. Everyone I know of who has a low income wants to work,” he says.

Perry notes there is an equal responsibility for basic income policy architects to never give up on creating good, sustainable jobs.

“I’ve got farmers in the area telling me they’ll pay $20-25 an hour if they could just find people with the right skills. So we have a skills gap in Ontario that needs to be addressed, too.”

Participants currently receiving child benefits, such as the Canada Child Benefit (CCB) and the Ontario Child Benefit (OCB), will continue to be eligible to receive them during the pilot. The hope is that a basic income will support people to begin or continue working, or to further their education.

-- This article was originally published in the Precarious Work Chronicle here.